Depicting a cross fragment found in the rectory garden north of the churchyard in Andreas on the island.

On one face the space to the right shows a scene from the conflict of Ragnarök. Odin, one of his ravens on his shoulder, stabs at the wolf Fenrir with his spear, as the beast grips him in its jaws. Odin is devoured by the wolf and though the gods eventually prevail at great cost, a new mythological world order is created.

On the other side, a second figure of similar size is shown to the left of the cross shaft, holding a cross and what appears to be a book. Nearby are a fish and two knotted serpents, one of them trampled underfoot. The figure is interpreted as a priest, the fish as a potent symbol of Christianity, and the trampled serpent as signifying the triumph of Christ over evil. 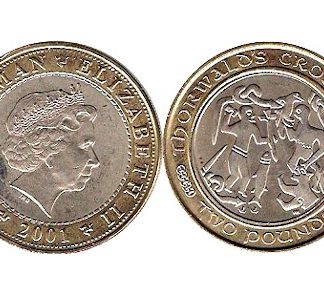